Time for Sense on Potholes! Change the 50mm ‘Intervention Level’! 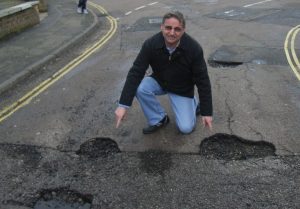 When is a pothole not a pothole? When it is less than 50mm apparently, at least according to council policy! This means that when a pothole is reported by residents (and often by your local Lib Dem Focus team), a member of council staff comes out to measure the pothole to make sure it is deep enough to fit the policy before it is listed to be fixed. Aside from staff spending a lot of time measuring rather than fixing, it means there are a lot of problems on the road getting worse before they will be looked at. Madness! MK Lib Dems believe that the current policy is clearly not fit for purpose.

Lib Dem Group Leader, Cllr Douglas McCall, said, “While the other two parties try and outdo each other with promises of the thousands of potholes they are going to repair, the Council says that at the end of March there were only 270 potholes on the system awaiting repair. That is because the Council is going out and measuring potholes and if they are not at least 50mm deep, not only are they not repairing them they are not even recording them as a pothole.”.

“We believe that the intervention policy is wrong and needs to be scrapped or at the very least lowered to 30mm.”

Cllr McCall concluded “Currently, there are thousands of potholes that the Council doesn’t even accept are potholes, so how are they ever going to get fixed?”

Fixing the potholes more quickly will also mean that they don’t become as bad, and the fix should stay in place for longer which will use council resources more effectively.

Our suggestions follow our recent campaign that changed council policy on ‘pothole clusters’ where one pothole has become deep enough to fix so was looked at, while nearby potholes that didn’t meet the 50cm criteria were ignored. The successful Lib Dem campaign means this shouldn’t be a problem any more, and that section of road should be fixed properly!

Support our calls for the ‘intervention level’ to be reduced or scrapped.