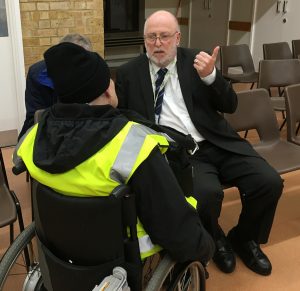 Cllr Paul Alexander speaking with a resident at the end of the meeting.

Liberal Democrat Councillors have held a series of meetings with Arriva about the changes to the changes to the No. 1 and No. 2 bus services. This led to the agreement by Arriva to hold a public meeting to listen to residents concerns.

This meeting was held on the 9th February when managers from Arriva attended.

Arriva got a clear message from the packed hall that residents were not at all happy about the changes. Many of the issues raised, such as difficulty getting to and from work, MK College, the hospital, and Willen Hospice as well as the longer journey times, overcrowding or being left at the bus stop, had already been raised with Arriva by Lib Dem councillors.

Cllr Paul Alexander got Arriva to agree to come back to another meeting outlining their proposals following the feedback from residents.