On the weekend a group of Milton Keynes Liberal Democrats travelled down to London to join the march to protest against Brexit, the People’s March for the Europe on the 9th September 2017. 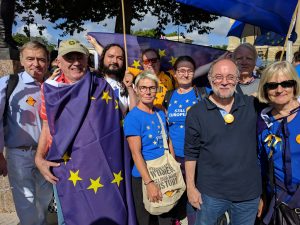 The Liberal Democrats are fighting to keep Britain as close as possible to the EU in the long term, retaining all of the benefits of the Single Market and Customs Union (both the benefits and responsibilities), and to give the British people a choice at the end of negotiations to go with whichever deal is negotiated or remain in the EU.

We believe that that the best deal for Britain is full membership as a leading member of the EU.

The Liberal Democrats have for the last 30 years been the most consistently pro-EU party in the UK, and the Milton Keynes Liberal Democrats will continue to fight for our country to remain a full party of the European Union.

The party leader made the news, Vince Cable having become one of the most powerful voices calling for Britain to stay in the Single Market, and fighting against the destructive and extreme Tory Brexit that Theresa May is leading.