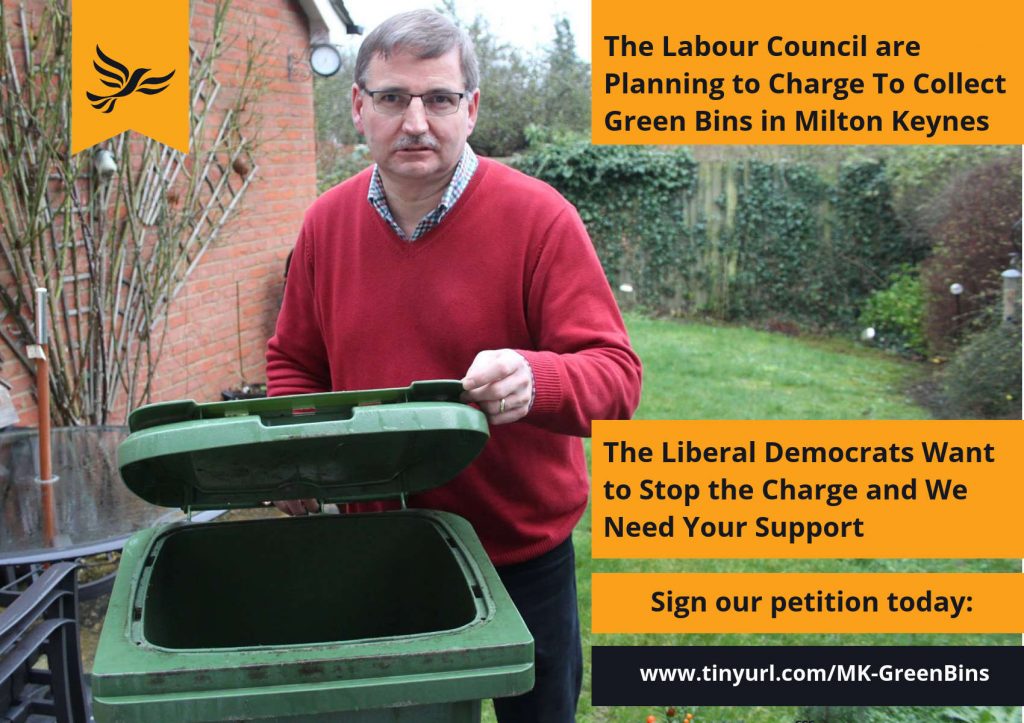 The Milton Keynes Council Cabinet are planning to introduce a charge for the collection of green bins from residents.  The Labour run council are planning to charge each household £33 per bin per year for collection, and the charge would start from 1st September 2017.

We are campaigning against the plans for a green bin charge, because we believe it will cause an increase in fly tipping and other problems, and additionally will not raise as much money as the council leaders have predicted.  Our worries which were raised by Cllr Douglas McCall include:

We have also carried out some investigations, and while the Labour executive are assuming that 28% of eligible households will pay for green bin collections, Croydon council have advised that a similar charge in their area only had 13.8% take up last year.  The same collection level in MK could lead to residents in our area facing even larger cuts to other services while receiving a worse service for waste collection!

In an Executive Scrutiny Committee meeting on 6th April our Liberal Democrat councillors led a successful challenge about the way the decision to charge for green bins had been made and lack of evidence for it, and the policy to charge  has been referred for discussion at the next Full Council meeting.

The reasons to challenge the policy include a lack of consultation by the executive, ineffective scrutiny of the decision, widespread resident concerns, and questions if the expected savings will be achieved. Since the next Full Council meeting is not due until June, our councillors called for a special meeting of Full Council.  The special meeting is currently planned for Wednesday 3rd May.

Due to government legislation, Full Council does not have the power to overturn the Cabinet decision, only to ask them to think again, therefore we need your support to put more pressure on the council executive.

The petition will be given to the council as soon as the Full Council meet to discuss the concerns about the charge.

To show your support for our campaign, please sign our petition: