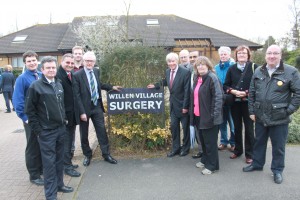 At the invitation of local Lib Dem councillors Lib Dem Health Minister Norman Lamb MP visited Milton Keynes on the 6th March to see for himself whether health services in Milton Keynes are keeping up with our growing population.

Milton Keynes Liberal Democrats explained to the Health Minister about complaints from residents about the difficulty in getting a GP appointment and the shortage of GPs, especially since Willen Surgery closed sending up to 4,000 patients by alphabetical order to Kingfisher Surgery in Newport Pagnell, Broughton Gate Health Centre, Oakridge Park Medical Centre and Purbeck Health Centre.

Mr Lamb said “I’m concerned with what happened and the way NHS England dealt with it, allocating people by surnames without any recognition of distance”.

Mr Lamb was very interested to hear about Lib Dem councillors concerns and actively listened to the proposal from the Newport Pagnell Medical Centre and agreed to follow it up with NHS England.